No Result
View All Result

Before the general election on Tuesday, Kenya has just completed a high-octane campaign phase. Today is the only day when candidates for any seats have to convince the electorate to support them.

According to a TIFA poll, Raila has a 47 percent advantage against William Ruto, who has 39 percent.

According to an IPSOS survey, Raila Odinga has a 47 percent advantage over William Ruto’s 41 percent.

With 49 percent of the vote versus Ruto’s 41 percent, Raila leads in the NMG POLL.

According to an Infotrak poll, Raila Odinga has 49 percent of the vote over William Ruto’s 42 percent.

None of the surveys are reaching 50% plus one, but it is obvious that Raila Odinga of the ODM is the candidate to beat.

William Ruto will have a far larger deficit to close in the event of a runoff in order to reach the threshold of 50 percent plus one required to be elected president. 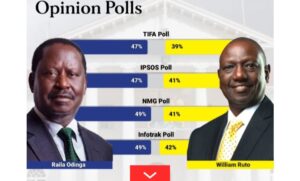 Newssawa.com is a prolific writer platform , a contributer to the world literature and a keen social commentator. Our team therefore treats you to the best researched articles on all areas of your interest. Twitter: @newssawa.com Facebook @newssawa.com